All you need to know about CPU Coolers

A CPU or the central processing unit is one of the most crucial components that have gotten human civilization to where it is. It is the brain of a computer. These processors are powerful, and this power brings heat with it. Without any cooling, it won’t take a minute for these processors to fry themselves. That’s why CPU coolers are important.

A lot of people underestimate the importance of CPU coolers and that results in an unbalanced build. The goal of today’s article is to clear any sort of confusion regarding CPU coolers and to help consumers make better decisions with their CPU coolers.

Should you use Stock Coolers?

A lot of CPUs come with stock coolers. Intel offers stock coolers with their non-K CPUs, which refers to the non-overclockable variants. AMD offers them in most of their CPUs. Only the higher-end models come without one, for example, the Ryzen 9 5900x. As long as you are not overclocking, these coolers will do great for the vast majority of workloads. But there are certainly times when these coolers will fail to deal with the heat and you will face overheats even when your CPU is running at the stock clock speed. This might happen during intensive rendering, heavy graphics mods, and even some games. Also, if you are getting a high-end PC for resource-intensive scientific research, a stock cooler will probably not be enough. Again, the stock coolers might be insufficient if you are getting a higher-end CPU, for example, the i9 12900.

If you are getting a lower-end rig with something like a Ryzen 3 or an i3, you should be good off with the stock cooler. In that case, you should be focusing your budget on the other components, because chances are you are already very tight in terms of your budget.

TDP is short for Thermal Design Power. In our context, it indicates the amount of heat the CPU cooler can deal with. It is measured in Watts because TDP actually shows the heat generated by any amount of electricity. For example, a cooler with a 105 Watt TDP rating will be able to cool the heat generated by 105 Watts of electricity. Both CPUs and Coolers have TDPs listed in their technical specifications.

Not all CPU coolers are ideal for all rigs. There are external factors that might obstruct you from installing your favorite CPU cooler. This is especially a problem with the air coolers, as they tend to be bulkier.

The first blockade can be the case itself. The maximum CPU cooler height is listed in the technical specifications of casings. Make sure to check that along with the height of the cooler itself to avoid any disturbance while installing the cooler. 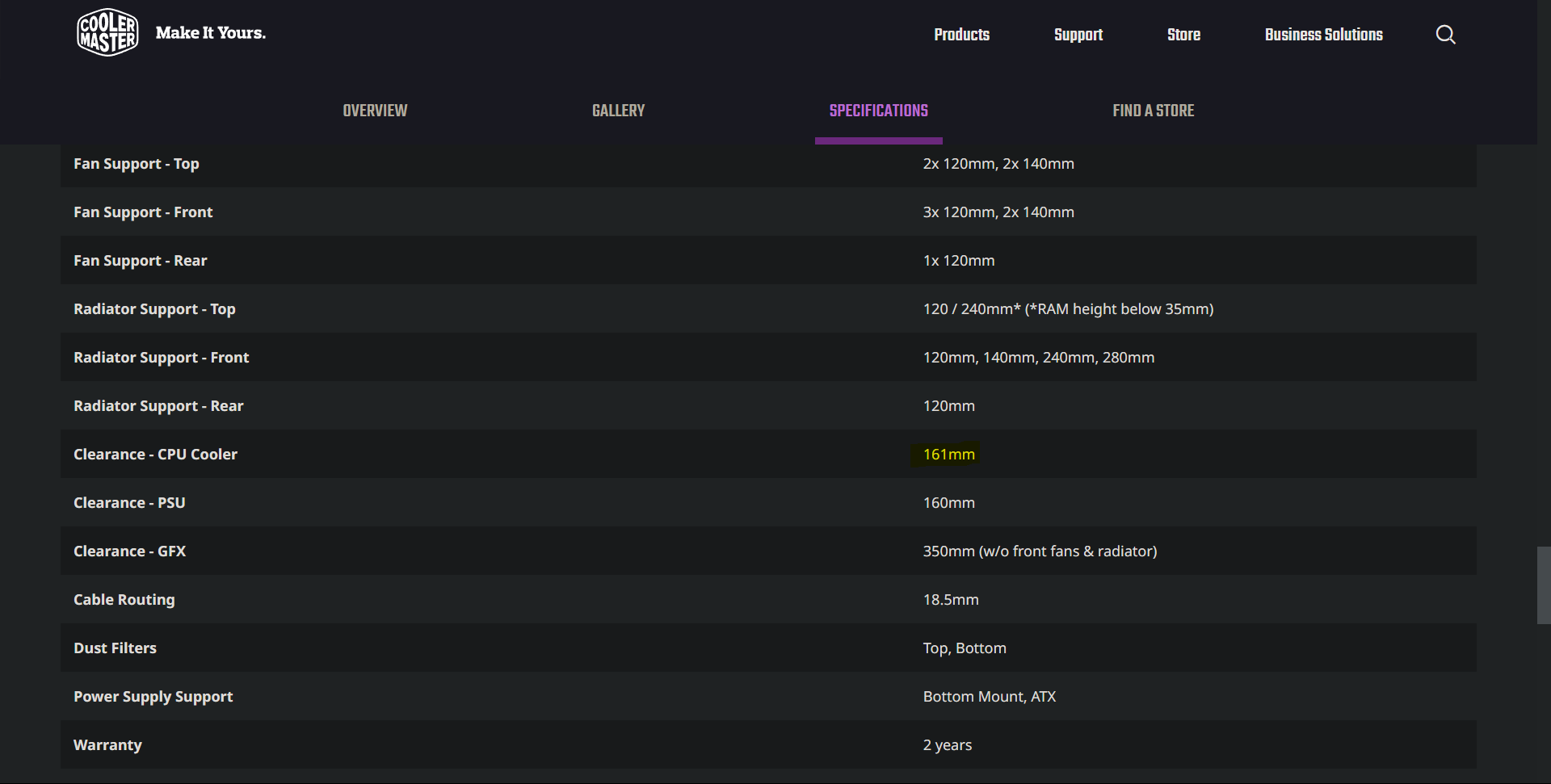 The next obstruction can be the RAM. There’s a good chance that the RAM sticks will interfere with the CPU coolers because of their height. This should only be a problem if you have beefy RAM sticks. If not, you should be okay. If you can find the height of the starting of the heatsink relative to the bottom of the tower, you can use that to check if your RAM will prove to be a hazard.

AIOs generally don’t cause a lot of trouble, but it is a good practice to plan out how you will run the tube. The tube may interfere with the RAM or other components. Besides, it would be a shame if you spend more on your components for the RGB just for it to get blocked by an AIO’s tube.

This one is quite straightforward. CPU coolers have fans. And most of the noise that comes from a PC is to the credit of these fans. If you are concerned about noise, you should check the decibel ratings of the CPU coolers and the fans if you are planning to get aftermarket fans. Some noise may be produced by the pump of the AIOs but that is ignorable for the most part.

Air coolers are basically the typical fan and heatsink-based coolers. They conduct the heat through the heatplate which is usually built with copper, but aluminum is not a rare sight on the lower-end units. Then the heat is transferred from the heatplate to the heatsink by the heatpipes, and as such the heat is spread over a larger surface area. Finally, the fan blows the heat out.

Inside the heatpipes, there is some heat conductive gas or liquid that works to transport the heat. Interestingly, even an “Air” cooler can have liquid inside it. But that doesn’t last for long as the liquid eventually evaporates when it comes in contact with heat.

AIO coolers, on the other hand, depend a lot less on metal conductivity. These coolers conduct heat from the CPU using a baseplate similar to the air coolers, but it is the next step that makes these AIO coolers different. Instead of heatpipes, a liquid coolant circulated by a pump runs through the tubes and takes the heat to the radiator.

The radiator has a couple of pipes and in between the pipes, there are fins. The fluid flows through the pipes and it is conducted by the fins. The fins are used here to increase the surface area. More surface area makes it easy to dissipate more heat. That’s where the millimeters come in. They indicate the length of the CPU coolers. The higher the length, the better the cooling.

Benefits of having an Air Cooler:

Downsides of having an Air Cooler:

Benefits of having a Liquid Cooler:

Downsides of having a Liquid Cooler:

Today’s market has an abundance of solid-performing liquid coolers. But the truth is, you will not be able to utilize these coolers to their full potential without proper airflow.

Make sure that there is an adequate amount of fans in your rig and that there’s a decent balance between the intake and exhaust fans. It is a good practice to look at the openings in your case and plan the fan layout that way. When you are dealing with air coolers, make sure that the heat exits the heatsink in the direction of the airflow. Besides, dust may interfere with the airflow too. It is good to give your PC a cleanup once every week or so.

When it comes to liquid coolers, the best position for the radiator is the top of the case. It is good to clean the fins once in a while.

First things first, peel off the sticker under the heatplate before installing it. Otherwise, you will be having a PC with a CPU whose heat is being conducted by plastic.

It is not really a logical choice to avoid AIOs fearing that it would leak. AIOs tend to last good 5-8 years depending on how much time you spend on your computer a day. It’s generally the pump that kills the AIO. Leaks are very rare, so you shouldn’t be worrying about that. The risk of a leak, however, persists in the custom loops.

Cooling does not provide you with more computing power, but it increases the efficiency of your components. A CPU is an important part of your build, but without a proper cooling solution, it will not operate at its full capacity. As such, always treat your CPU well and it will serve you better. Hope you learned something new today. Thanks for reading.