In a crowd of pay to win Battle Royale titles, Nadan Studio comes up with Oscillate, an arcadey stylized racing game set in fictional locations. It is developed by two students of 10th grade. Instead of focusing on real physics and driving mechanics, they decided to focus on something arcadey. Something family friendly which might be enjoyed by everyone. 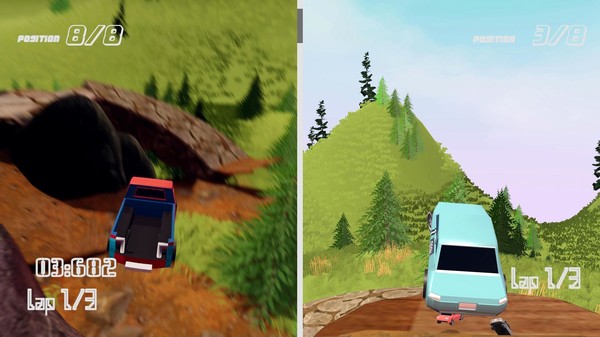 Oscillate has offline mode, CO-OP, and multiplayer. There are 10 different vehicles with unique physics and 10 different maps for you to play around with. There are Arcade, Tournament and Time Attack in Single Player, and Arcade and Tournament in CO-OP. I don’t know about multiplayer because I couldn’t play a match yet. The game has a unique visual style. The cars, props, everything is low poly and stylized. They are trying to make the game accessible and arcadey instead of realistic. That’s what sets it apart from 5 other games and this is the point that got me excited and hyped. Let’s see if this game lives up to my excitement.

The cars feel weightless. It feels like I’m driving plastic. Your car gets hit, it will fly back. The physics is simply not believable. I get it, it’s arcadey, meant to be easy. But it shouldn’t be unbelievable. I mean, the cars literally start sliding downwards when the car is standby on bent surfaces. There’s no impact noise when the car hits a surface. Have a look at the Need for Speed games. The game is arcadey. But there’s weight to them. The cars’ physics are believable. I want the game’s physics to be arcadey, but believable. The car shouldn’t just move back if it hits an obstacle at 100 miles per hour.

The driving is weird and overtaking other vehicles is nothing, but a matter of luck.

The cars can go from 0 miles per hour to top speed in less than a second. You’re basically driving at the exact same speed all the time. As a result, the only ways to overtake other vehicles, is to keep waiting till you reach them, or pray for an accident. You can’t even hit them yourself because you simply can’t get there, and even if you get there, you’ll just fly away if you hit them. This makes overtaking a task with no skill. And the steering sensitivity is too high.

The sceneries are beautiful.

From the race tracks, to the country sides, it’s all but beautiful. The level design is great. The low poly and stylized visuals are refreshing. But there are many assets from the marketplace. Not to say they are bad, or make the game look off, but the medieval houses look awkward in a racing game. Don’t get me wrong, using assets are just fine as long as the final product doesn’t look off. Knowing to use the assets properly is already a great skill.

The UI is messed up.

There’s only one volume slider, that’s the master volume. That’s all. You can’t manipulate the individual volume types. The graphics section is also too straight forward. You can’t manipulate individual render settings, such as Texture Quality, View Distance, Ambient Occlusion, Post Processing, etc. There are many spelling mistakes. Most notably, the mute button does the opposite. If it is unticked, the sound is muted, and ticking it unmutes the sound as you can see in the screenshot below.

As of writing this review, the game is simply not finished. It needs a lot more work. If you have some spare money left, you can pick this up considering it is dirt cheap at 4$ on Steam. Even after all these issues, it’s a great start for a small development studio. I’d suggest Nadan to keep learning and keep working. Who knows? Maybe they will be developing a masterpiece one day. Best wishes to Nadan from PC Builder Bangladesh.