We are only 2 days away from CES 2018. Many manufacturing companies are gearing up with their new and improved products for CES 2018. But one of the most interesting thing that has caught PCB BD‘s eyes was the announcement of unveiling new Micro ATX motherboards made by none other than ASRock.

The micro ATX motherboards ASRock has planned for launching at CES 2018 are the X299M Extreme 4 motherboard for the Intel’s Skylake X platform and X399M Taichi for AMD’s Threadripper platform. Let’s see what ASRock will be offering in these motherboards.

Whenever we think of AMD’s X399 motherboards, in an instance a picture of a huge motherboard comes to our mind.

Speaking of processor support this particular motherboard will feature a whopping 11 phase DR.MOS design and will be supplied power with two eight pin CPU power connector. To cool this power delivery system there are two massive heatsinks featured with heat pipe cooling technology.

ASRock X399M Taichi will come with 4 DDR4 DIMM slots. In spite of having only four, they will support quad channel memory up to 128 GB system memory.

For connectivity, this motherboard will have 8 SATA 6 Gbps ports, a U.2 port, two front panel USB 3.0 connector and every kind of other front panel connectivity ports you can think of.

For expansion, ASRock has given this motherboard three X16 PCIe 3.0 slots with full X16 running capabilities. Since Ryzen Threadrippar processors can drive up to 64 PCIe lanes, this motherboard will have no problem running whatever you throw at it(not literally though). 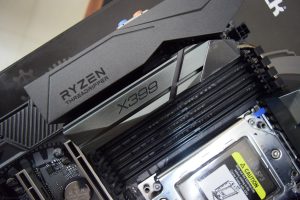 There are three Ultra M.2 slots with rated speeds of up to 32 GB/s (PCIe 3.0 x4). The PCH is cooled by the Taichi gear featuring RGB lighting. The audio is powered by ASRock’s own Purity 4 system.

The second Micro ATX board that ASRock will be launching at CES 2018 is the X299M Extreme 4 motherboard for Intel’s X299 LGA 2066 socket which will support up to Intel’s 18 core 36 threads 7980XE which is an absolute monster. Like the Threadrippar motherboard, this one will also feature 11 phase DR.MOS but will be supplied power with only one 8 pin CPU power connector. The heatsinks can be found on top of the VRMs which looks pretty solid and include heatsink cooling design.

Following the design of X399M taichi, ASRock X299M Extreme 4 will also come with 4 DDR4 DIMM slots instead of the usual 8 slots we see on normal motherboards. However, these will support up to 128 GB of quad channel system memory with speed over 4000 MHz (XMP OC).

Expansion slots include three PCI-e 3.0 x16 slots which will run at x16/x8/x4 speed respectively. It also has two Ultra M.2 slots. We aren’t still sure about the onboard audio system but the quality of it will be decent.

In the case of I/O capabilities on the rear panel, the X299M Extreme4 includes four USB 3.0, four USB 3.1 Gen1, two USB 3.1 Gen 2 (Type A + Type C) ports, 7.1 channel audio jack, dual Gigabit Ethernet LAN ports and a clear CMOS switch along with a PS/2 port. It doesn’t feature wireless connectivity but we can expect the price of this motherboard to be a little bit on the lower side.

What are guys looking forward to most at CES 2018? Let us know in the comments.