Zero Hour: Is it any good?

Zero Hour, one of the very first video games that have been developed in Bangladesh. When the game was announced, it generated a lot of hype. At first glance, I thought it was just another competitive first person shooter. But I soon noticed that Zero Hour was being talked about the most by YouTubers who were into hardcore tactical shooters, like Ground Branch, Squad, ARMA, etc. This got my attention. After release, most people were praising this game because of the “Made in Bangladesh” and “Made by an indie development team”. But in most honest reviews, the game was just bashed. One thing I noticed, is that people like me who love hardcore tactical shooters just loved this game and said that the game has ‘potential’. So, I decided to give the developers some time, and purchase the game after most of the issues are patched. A few days ago, I heard that the game has been patched to a good extent. I decided to purchase it, and give it a try. In this post, I’ll review Zero Hour, and let you know how the game really is. 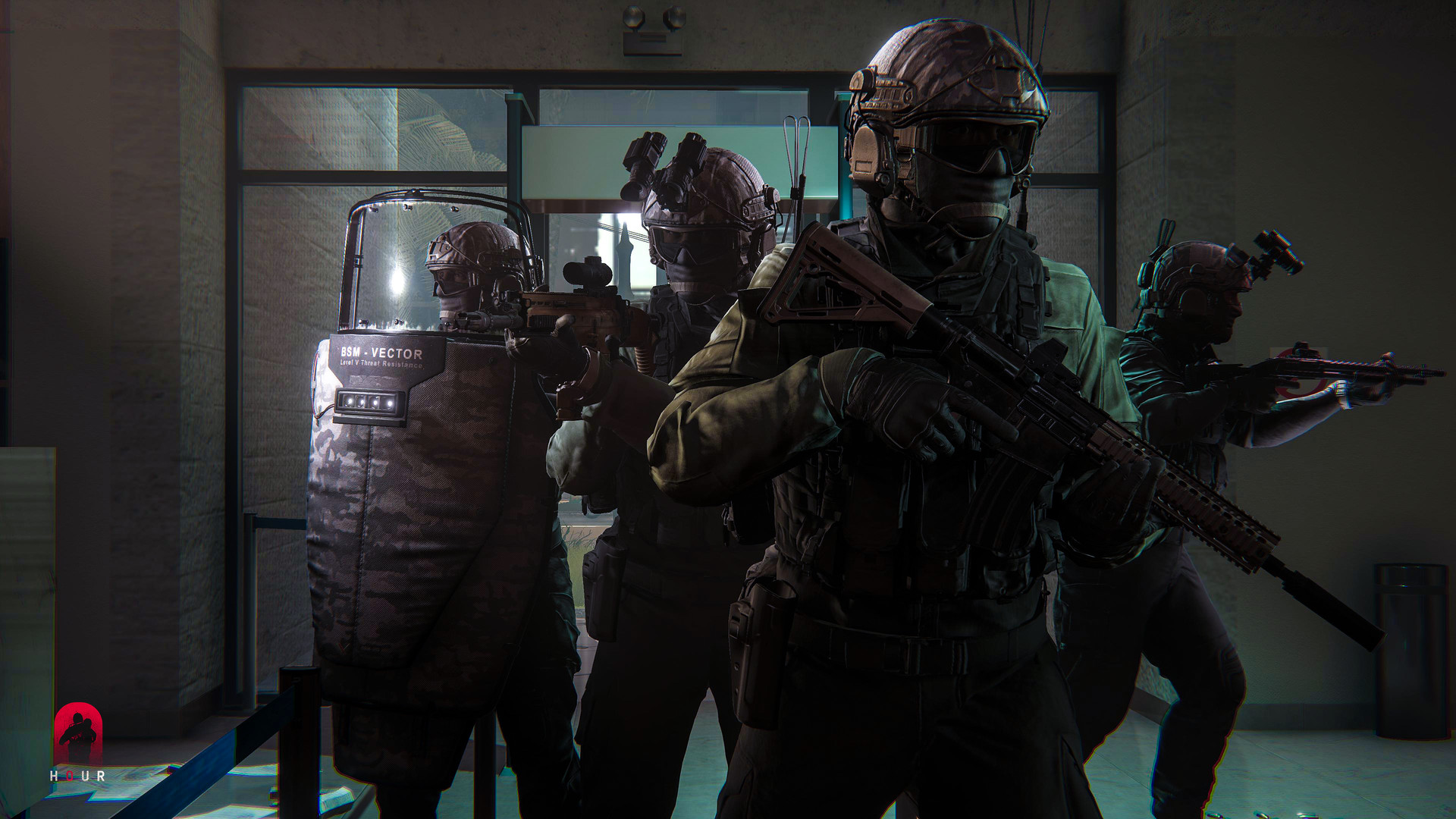 Zero Hour is a first person CQB focused tactical shooter developed by M7 Productions and Attrito. It is set in some locations of Bangladesh. It really feels nice to see home in a game like this. The game focuses on slow paced gameplay and teamwork. The game isn’t as realistic and hardcore as Ground Branch, also not so “arcadey” like Rainbow Six Siege creating a sweet spot between realistic and accessible. You have two teams, the attackers, and the defenders, being Counter Terrorists and Terrorists respectively. The Attackers breach the building, and rescue the hostage, and the Defenders hold the hostage. You have a variety of weapons and gadgets to choose from. Although it isn’t much, the developers are adding more and more stuff. Teamwork matters more than anything else. If you don’t work as a team, you’re pretty much screwed. 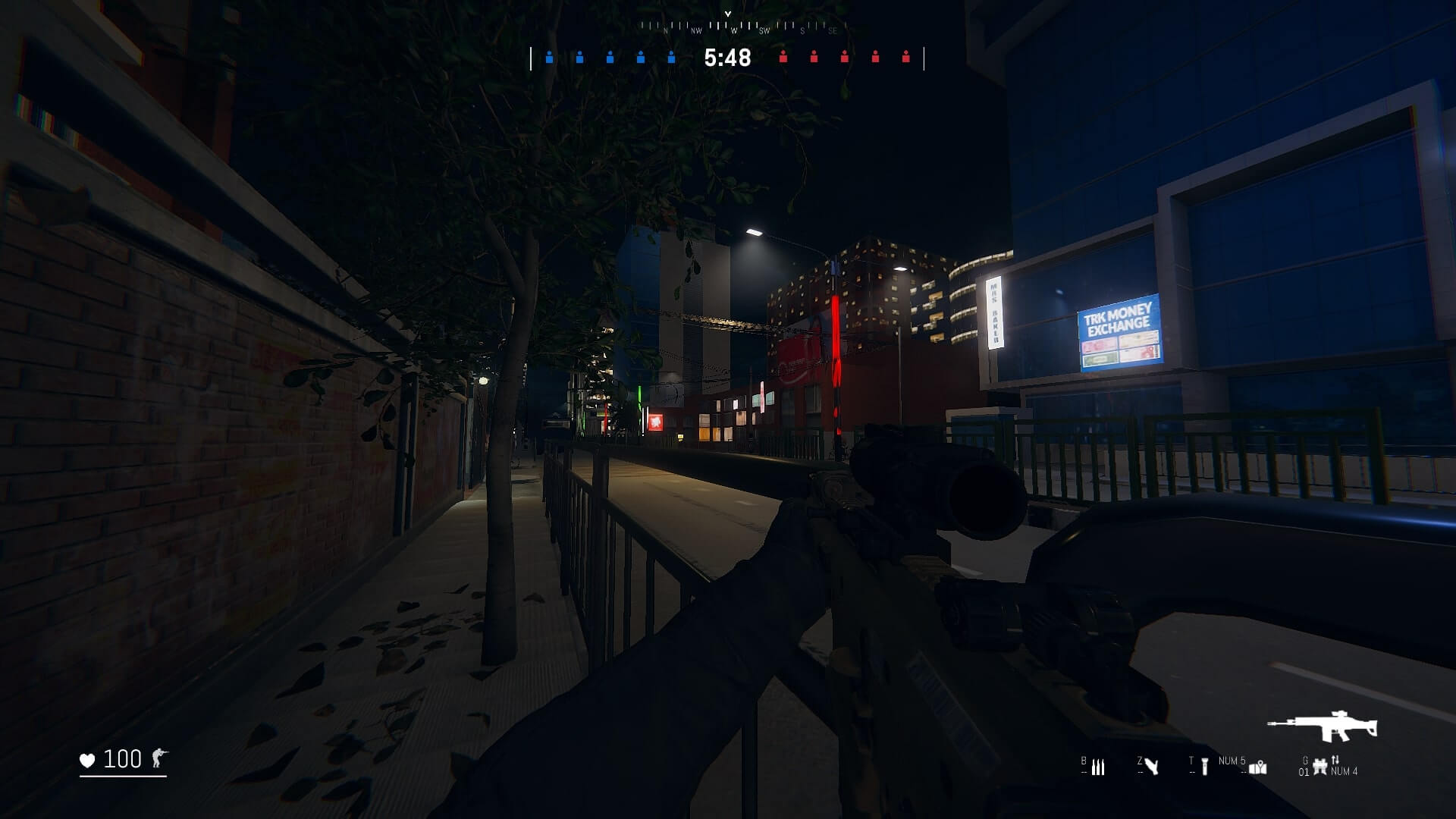 The game is slow paced and
teamwork is essential to win a match.

The movement speed in this game is extremely slow. There’s also a stamina meter which drains pretty fast. If your stamina is low, your weapon starts swaying making it difficult to aim. This forces you to move slowly. When outdoors, the slow movement bugs me a lot. But it feels just fine when indoors, which is basically 95% of the time you play this game. Without teamwork, this game is basically impossible to win. I suggest playing the game
with a friend of yours. Many random players tend not to use their mics making it really frustrating. Being a lone wolf is never an option. Being one makes it really easy for hostiles to kill you. 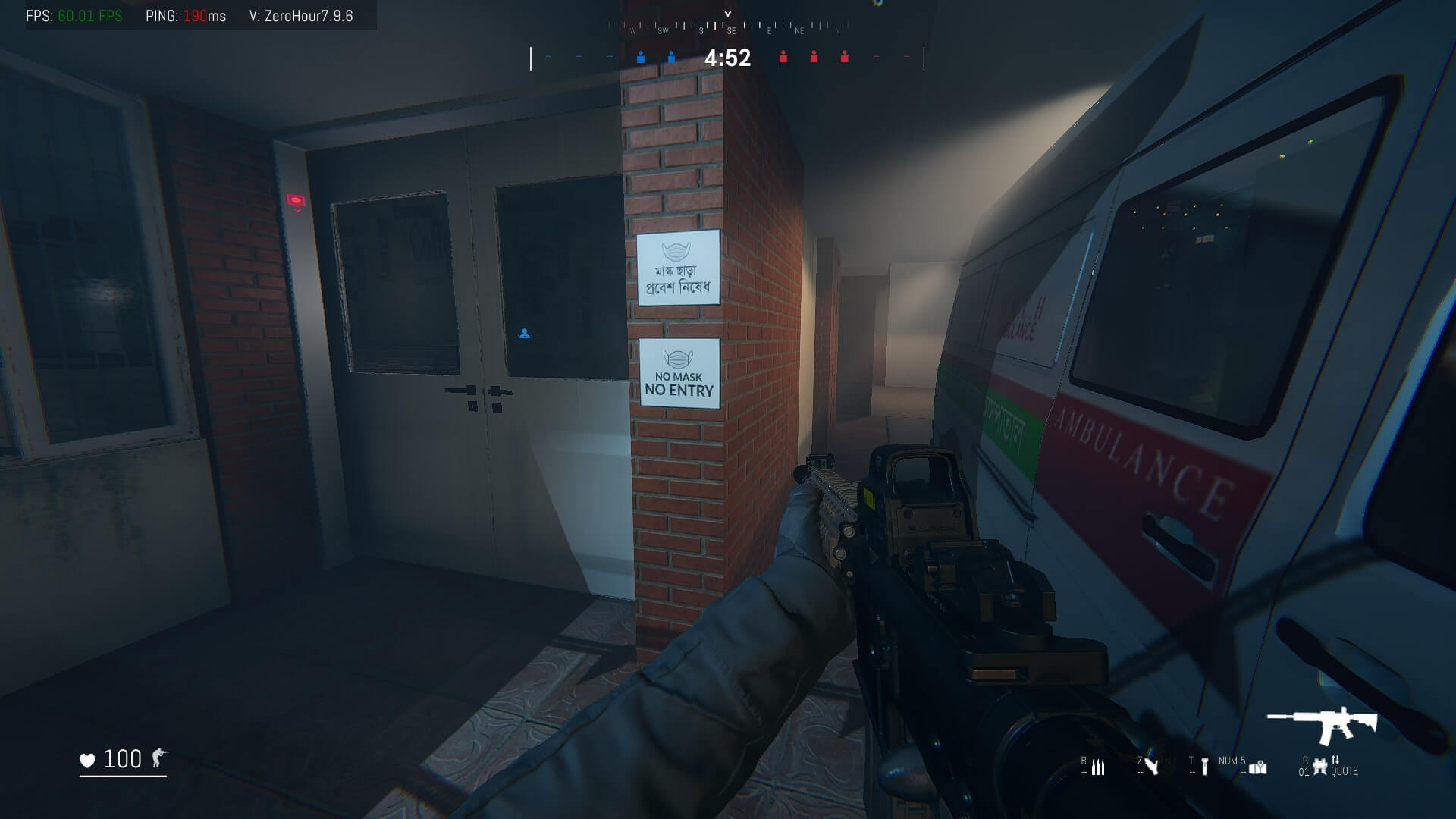 The gameplay feels decent, but
there’s definitely room for improvement.

The gunplay is fine, but the weapon sounds need some serious work. The weapon sounds don’t have much bass, and the Kyanite sounds way too loud. It’s enough to make me not use the gun at all. The animations are fine, but they aren’t that smooth. But they’re far better than they were at launch. With more time, I hope that the developers will improve them. M7 and Attrito did an excellent job in capturing the theme and creating the atmosphere. The lighting in this game looks really great. I really love the night time setting. There’s always fear working inside you. The lighting isn’t just a part of the environment. You can detect enemies seeing their flashlights. There’s always tension that works inside you when you see a flashlight. The shadows also help detect hostiles. In fact, I could literally use some maps of this game in a horror game. For example, the Café 14 map. The first time I played this map, I expected it to be just another map. But no! The map is different. The ground floor is basically a pharmacy and a café. The next two floors are a hotel or apartment of some sort. The top floor is under construction, which means no lights. M7 and Attrito decided to go a step forward with this map and add a psycho killer element to the map. There’s a literal slaughter house in the underground. The first time I played this map with my friend, he had no idea about the slaughter house. When he saw it, he literally started screaming. When I saw it myself, I was surprised too. I loved the fact that the developers took a risk by adding this. They didn’t care about the trouble they may get into, they just cared about the final product. This map is just brilliant. Besides, the UI also looks beautiful and helps with the theme. They also went the extra mile with some dialogues, for example, the terrorists saying, “মাফ করেন ভাই, ছাইরা দেন” when arresting the terrorists in Co-op, or just “রেইড দিতেসে,  রেইড দিতেসে” when they spot you. 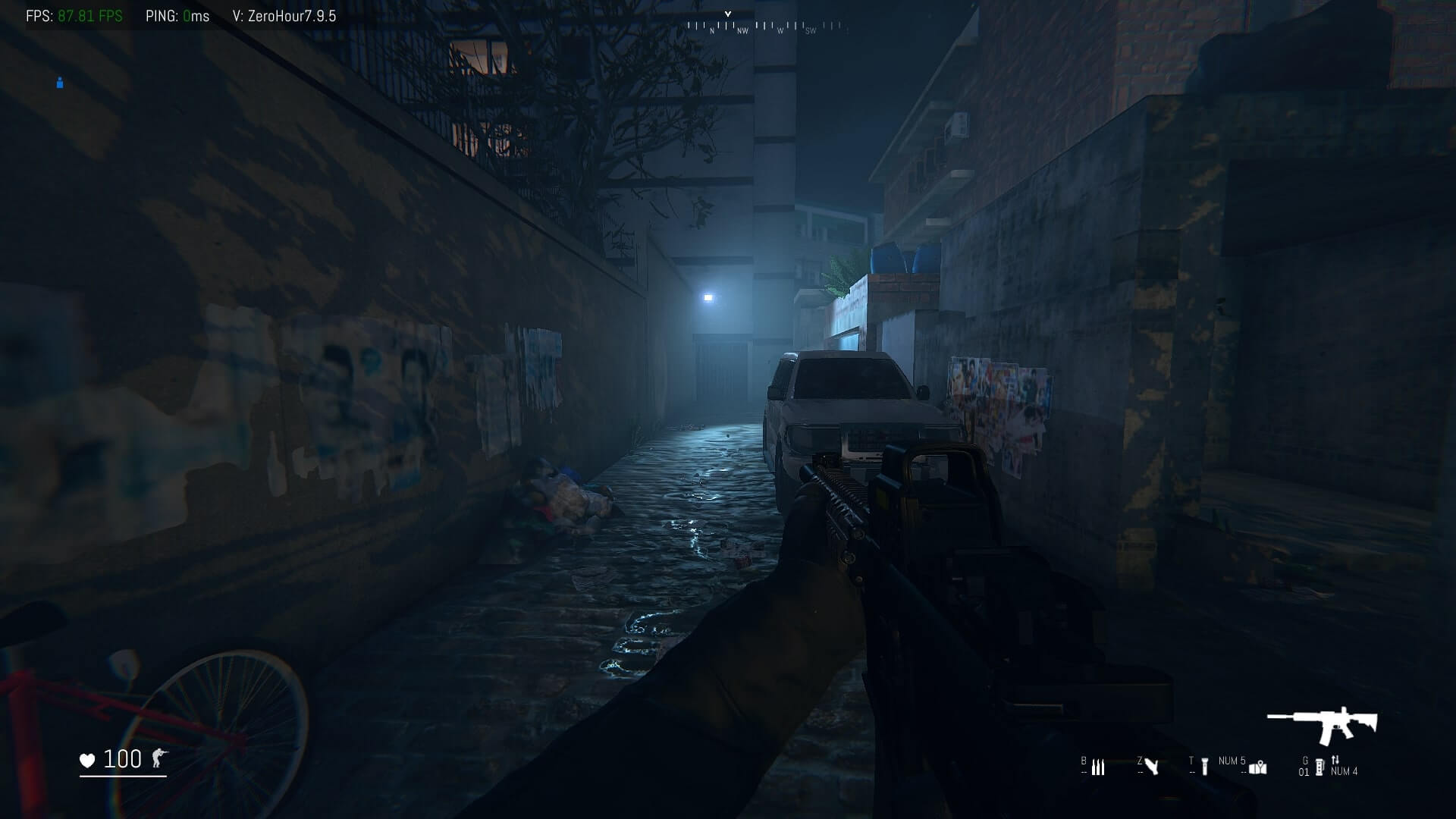 I loved the level design.

The level designers really did their work with a lot of enthusiasm. You can easily roam around the maps and feel like home. Starting from little details, for example mosquito nets on the beds, to details like the bamboos sticking out from the floor in construction sites, it’s all there. The maps are also well designed. The gameplay loop feels great. 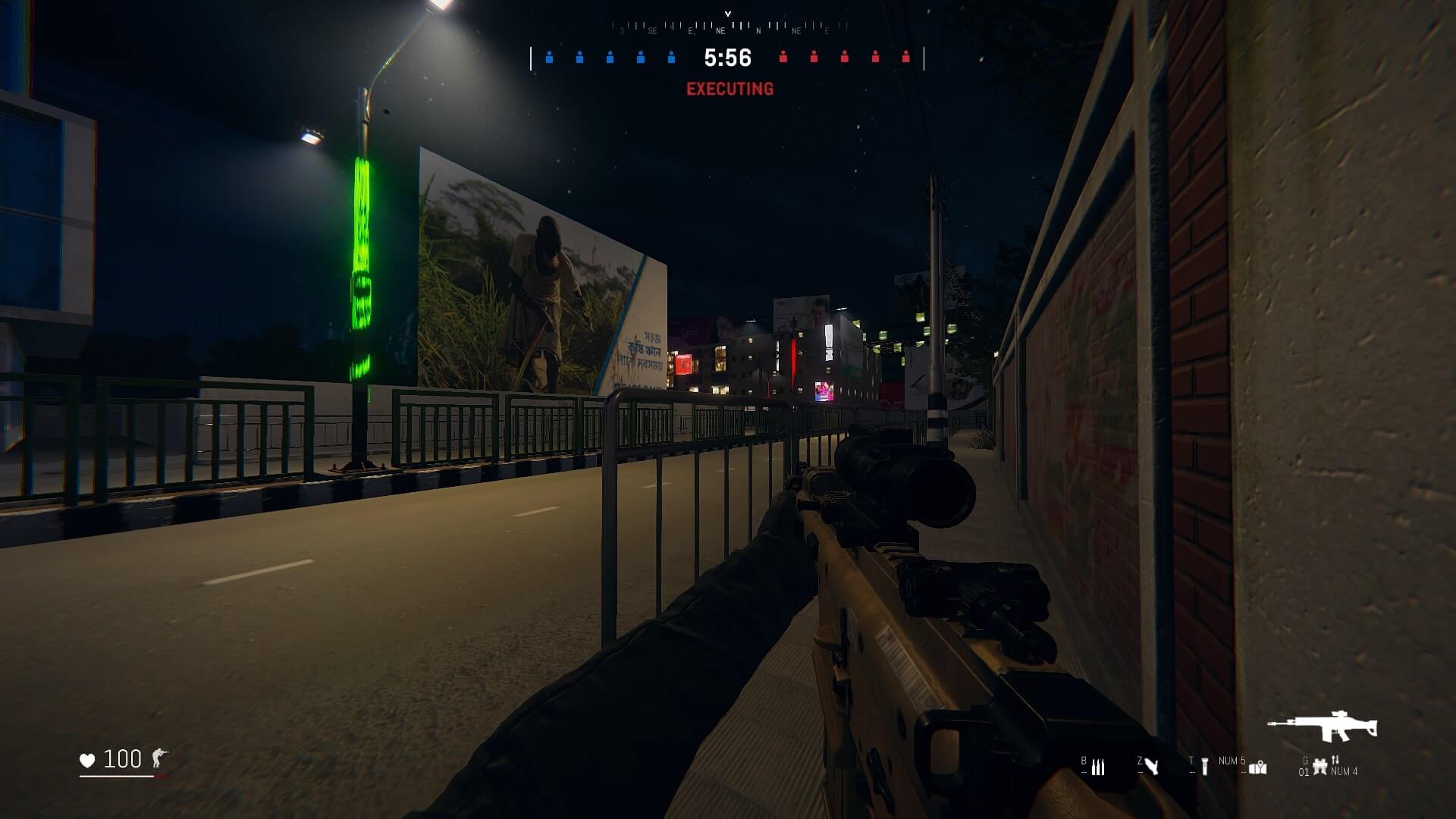 The game’s audio can be better.

The directional audio is weird. You can’t really depend on it to detect enemies. I often get confused when I hear gunshots. No, I’m not using a cheap pair of headphones. I’m using a 5.1 surround sound setup. The weapon sounds and the door kicking sound effects need improvement. The other sounds are mostly just fine. 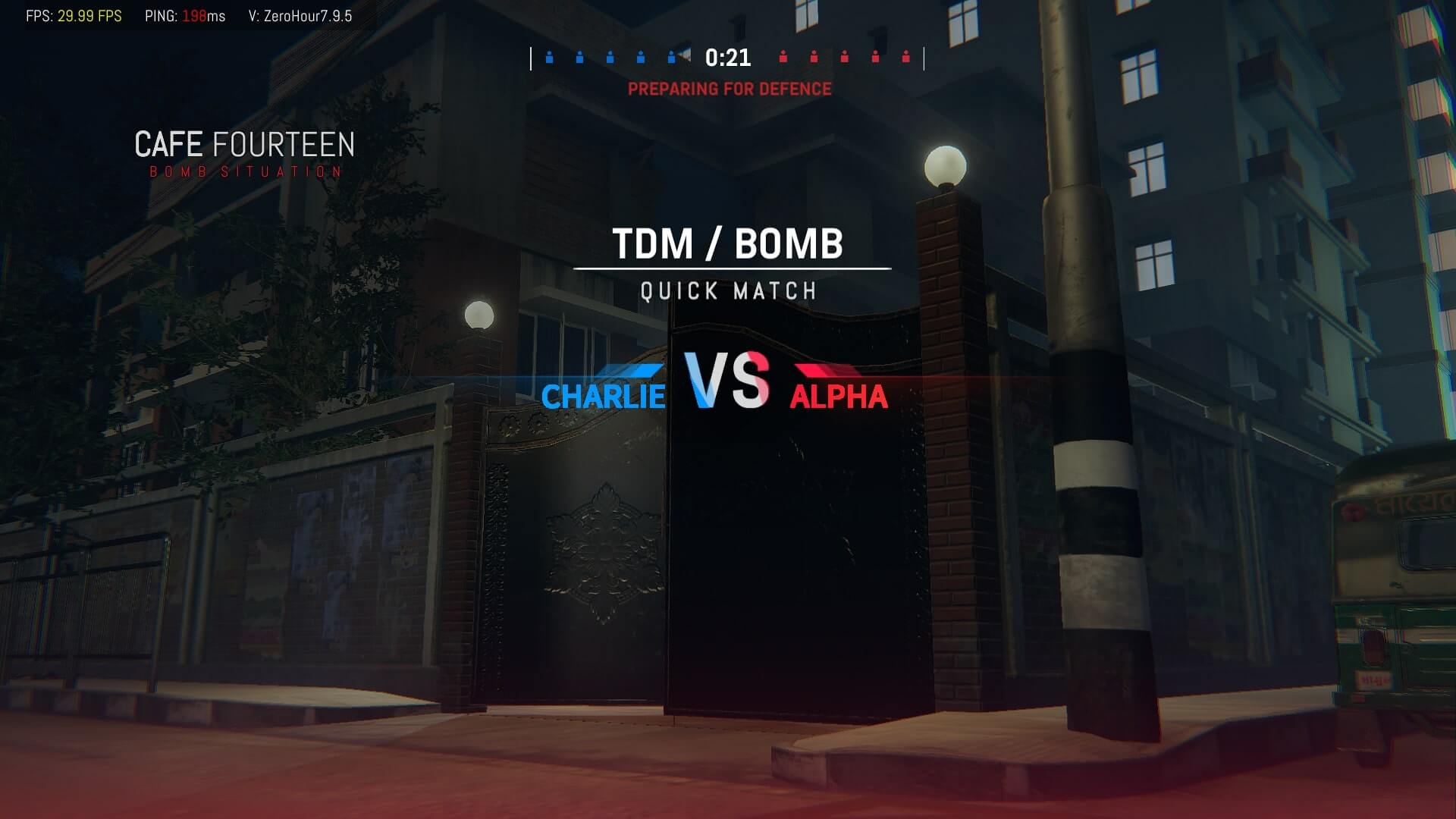 The Co-op isn’t very good, but a good way to kill time.

The AI is really basic, but way overpowered. I don’t know why anyone would even want to play Co-op when they can play a regular match. The building is literally full of enemies. Even if you play with 4 other people, it is near impossible to kill all of them. You can’t even change how many bots are there in the building. It would be fine if the AI were great. But again, they’re really basic. But when you’re going out somewhere, it is taking time for everyone to get ready, you’re bored, you can simply hop in a solo round of Co-op, and try to get through the round without getting killed. 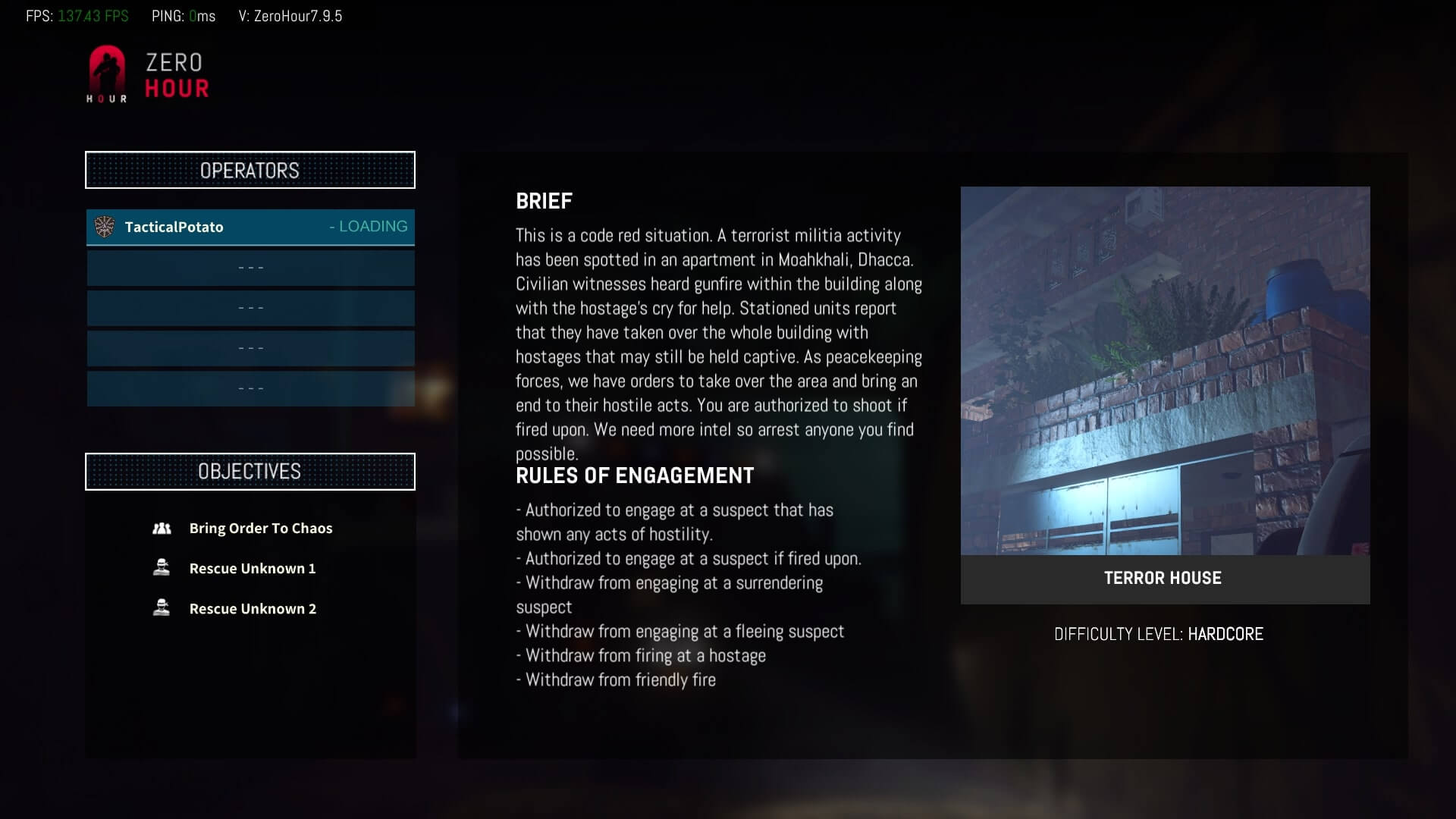 There are also some stuff in the Game that’s broken, or I just don’t like.

The very first thing I’ll complain about, is that, when you try to join a match with friends, the host enters first, and the rest of the lobby takes 5-10 seconds to join. In this period, the game sometimes crashes. And then there’s the Under Door Camera. Good luck using it. After equipping the camera, I couldn’t get it positioned under a door at all. The “Interact” icon just wouldn’t appear at all. Now, let’s come to the stuff I don’t like. First things first, the gun sounds. I’m not a huge fan of those. I would’ve liked to see some heavier sounds. Then we have the matchmaking system, which is really basic. Finally, I’m not a huge fan of the Co-op. 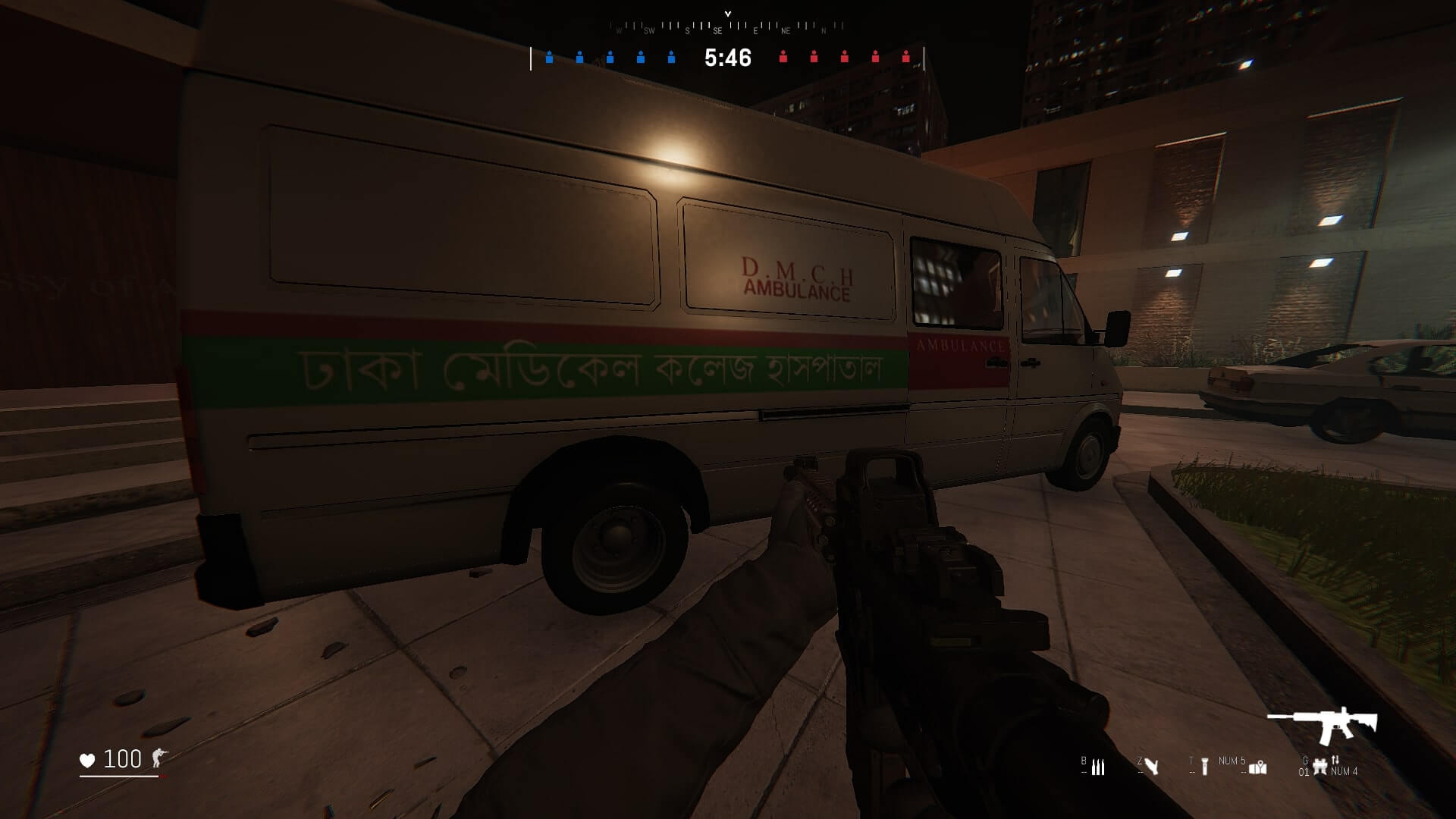 Even after all these issues, I liked the game.

Yeah, there are issues with the game. But I can play Zero Hour at night with my friends and have a good time. Why? Because the game does well what it wants to. I can still fire up Battlefield 2, play with bots, and have a good time. Why? Because it has all it takes to be a Battlefield game. Same with Zero Hour. It has all it takes to make a good CQB focused tactical shooter. I can have a good time playing this game, and that’s what should matter the most. With more time, I hope the developers can make the game even better. The game isn’t dead contrary to popular opinion. The Europe servers are really active. It takes me a few seconds to find a match. 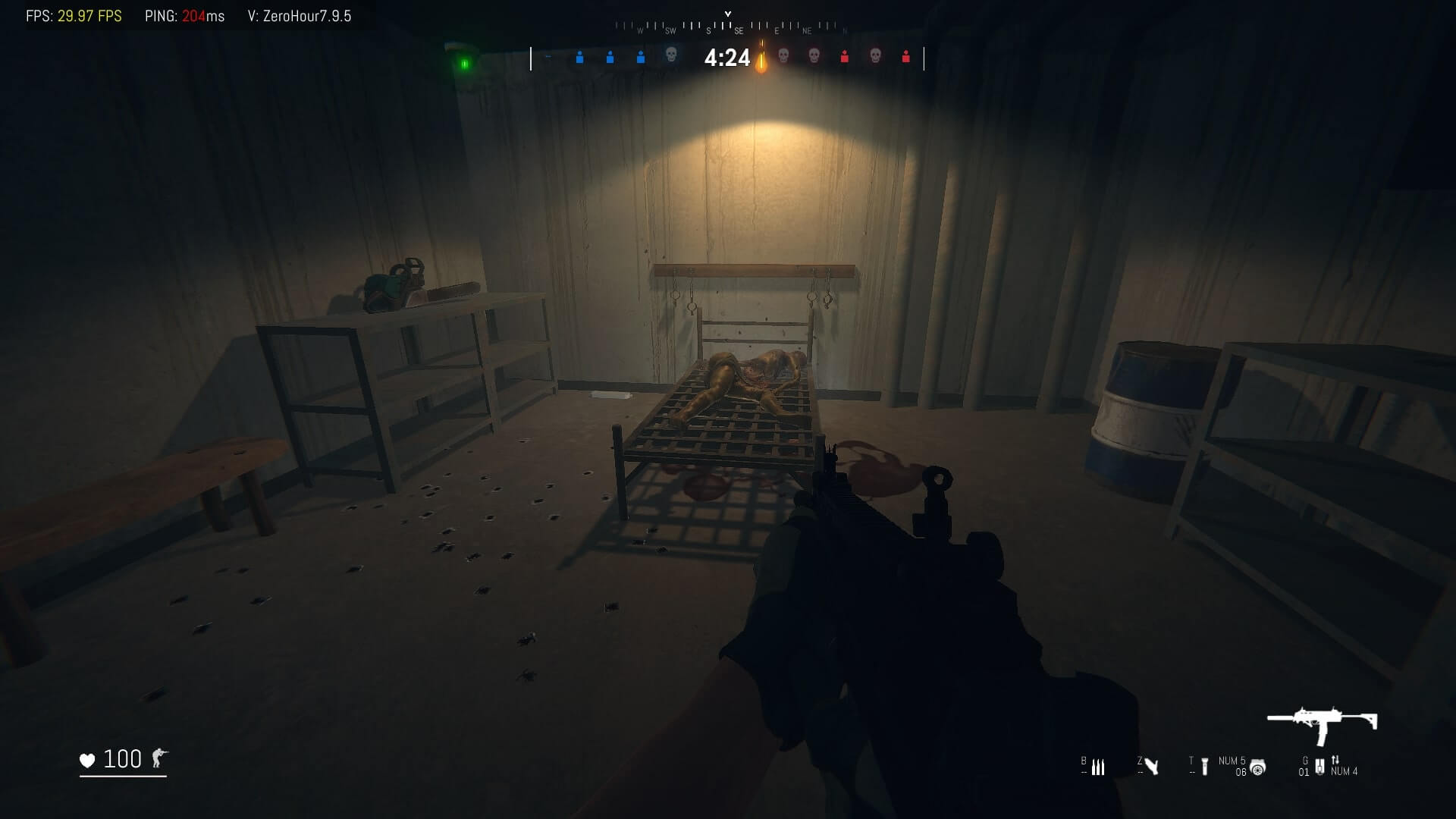 First things first, bug fixes. Second, I want better animations. More content. I want more weapons and a gunsmith type system. Realistic weapon naming would also be appreciated compared to the stuff we see now. More maps would also be appreciated. I also want an improved matchmaking system and a server browser. Lastly, I want a death animation. Without it, dying literally feels like getting slapped. 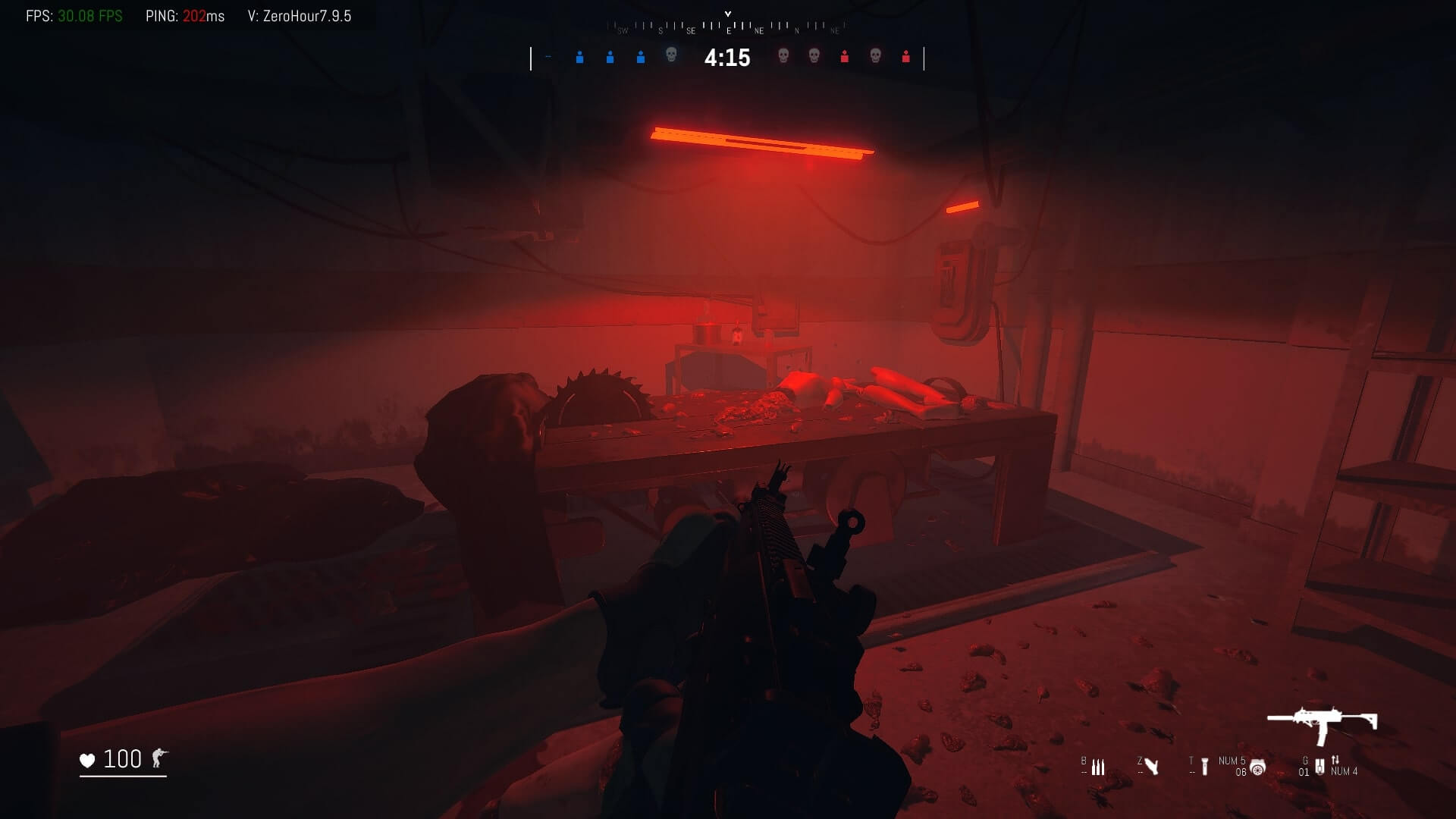 In a crowd of pay to win Battle Royale titles, Nadan Studio comes up with Oscillate, an arcadey stylized...
Games