Hello and welcome to PC Builder Bangladesh, this time we are collaborating with The Council with the goal of pushing the limits of ultimate 4k gaming. Presenting the mighty ‘SLIghtening Bolt’, an SLI Ready beast for the ultimate gaming experience, a build featuring the most powerful components available in the market.

The story behind the nomenclature: 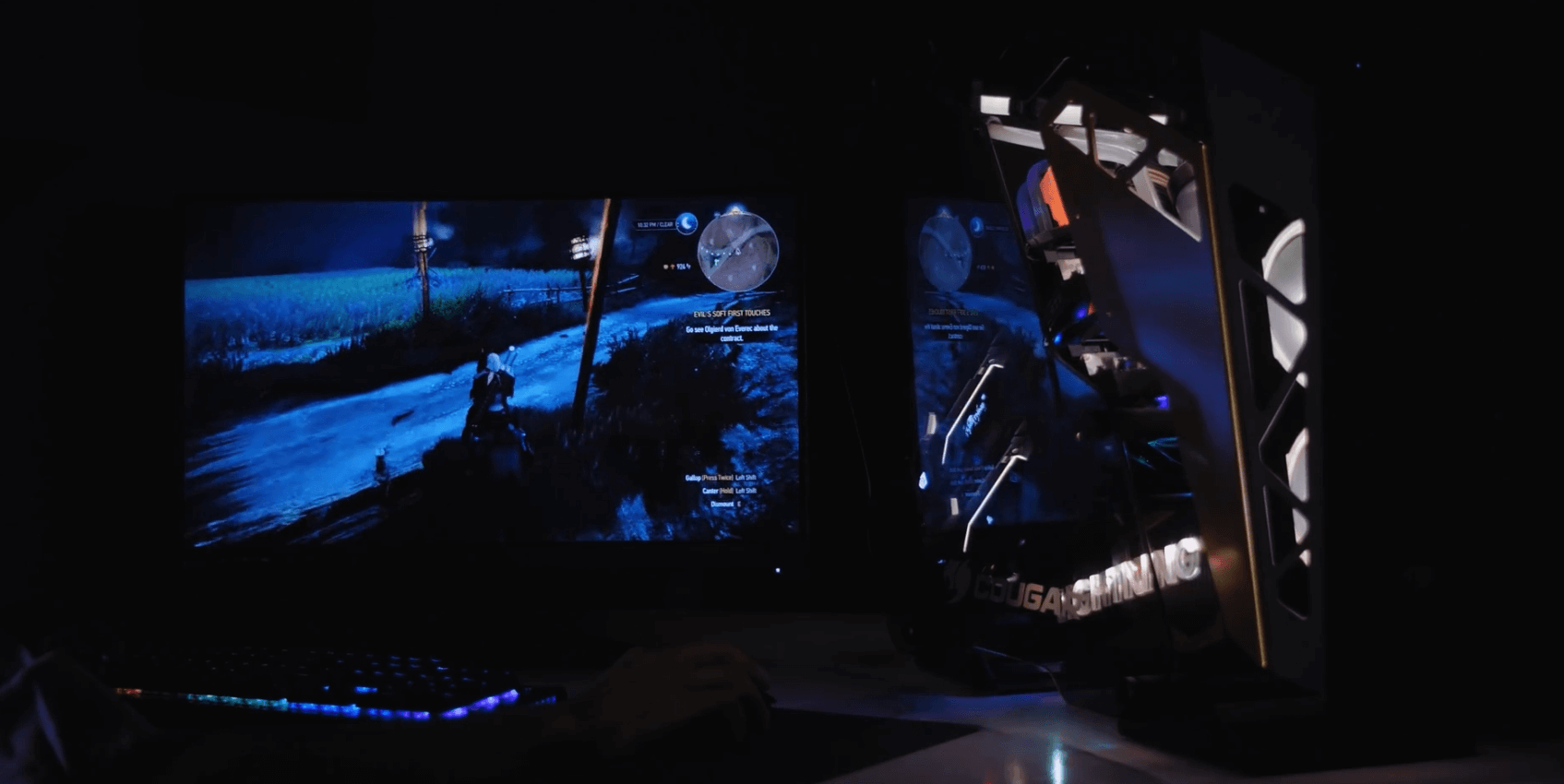 Speaking about the name, this build features SLI, many of us know well about SLI, we have used two identical graphics Cards that support SLI. As for the GPU we chose MSI’s RTX 2080Ti Lightning edition which was the fastest graphics card back in those days. An SLI Build featuring LIGHTNING GPU which is nothing but for lightning-fast gaming experience. Thus the name makes enough sense. Doesn’t it?

Owner and the builder:

This build is owned by Mr. Farhan who’s the founder and active member of the renowned Esports Team called The Council.PC building is his passion. As he is a competitive gamer, he always cherishes to get the most out of the available components available in the market. in competitive gaming, every moment, every frame is important and can play a vital role in winning or losing in a particular scene. If the hardware is not good enough, that can cause a huge FPS drop in graphically rich scenes, busy scenes. So the significance of top-tier hardware in competitive gaming does not need further explanation.

“I feel comfortable expressing myself as a gamer as it allows me to get to everyone a little bit better. “

The owner Talks about the hyped word (rather we should say phrase); 4k 60fps. People use this here and there, out of nowhere it’d been the standard for defining the ultimate gaming experience. Mainly his goal was to push this limit further, break the so-called barrier, and widen the margin as much as possible.

“Nowadays people have set a standard by themselves which is 4k 60fps.  we used to play esports games at 200-300fps we thought that can we go further, can we get more? “

“We can go to point b from point a using a scutter, then why do people spend 5,6 lakh and buy a motorcycle. It is the experience that matters. Speaking the truth, PC building, building an extreme machine is my passion.“ 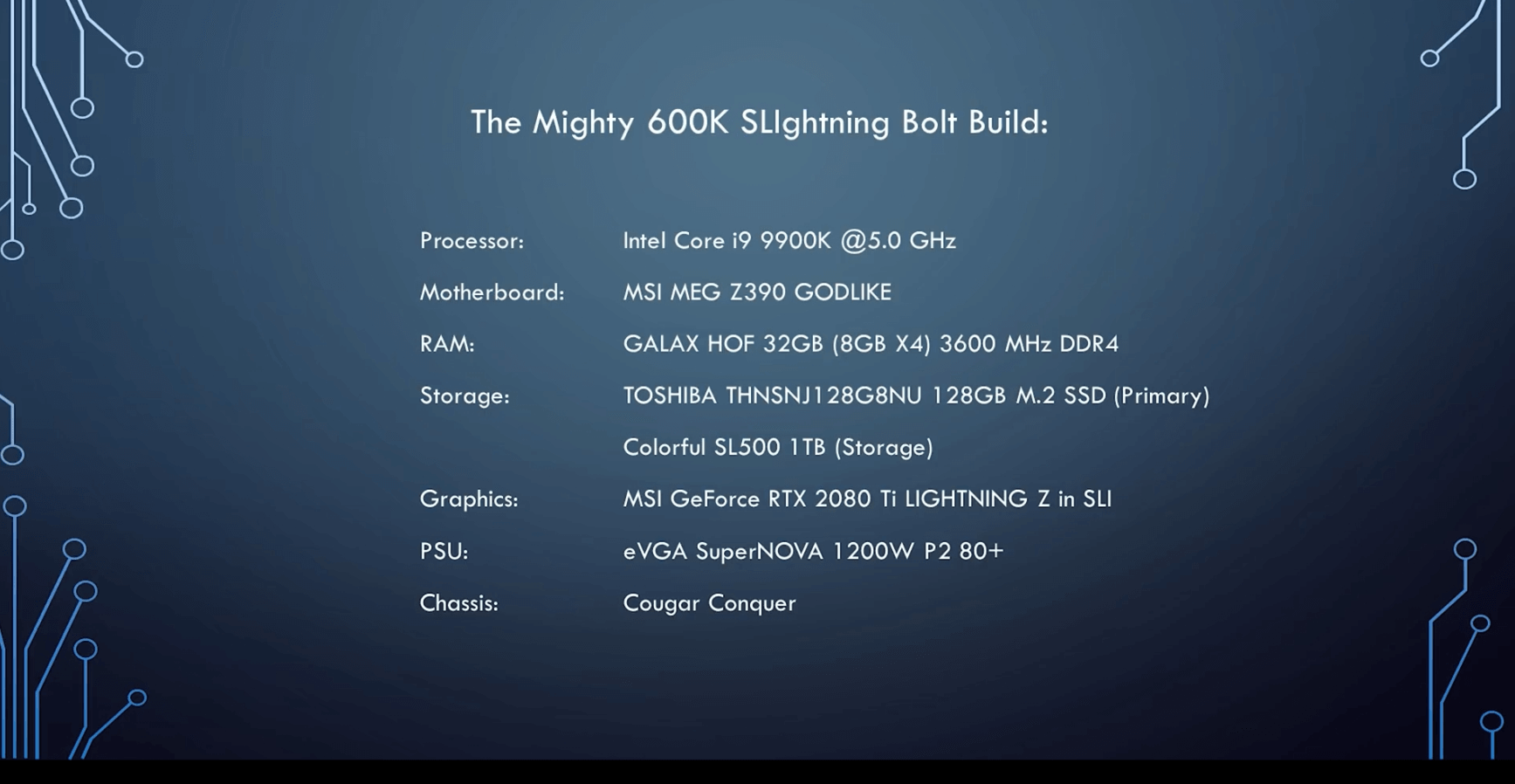 When performance is for the sake of your pc and the budget is not a problem, in addition, you are an enthusiast, you will go all out for the best components available in the market. So did the owner of this build. Before arguing about component selection or criticizing, please do note that the build was done in 2019. 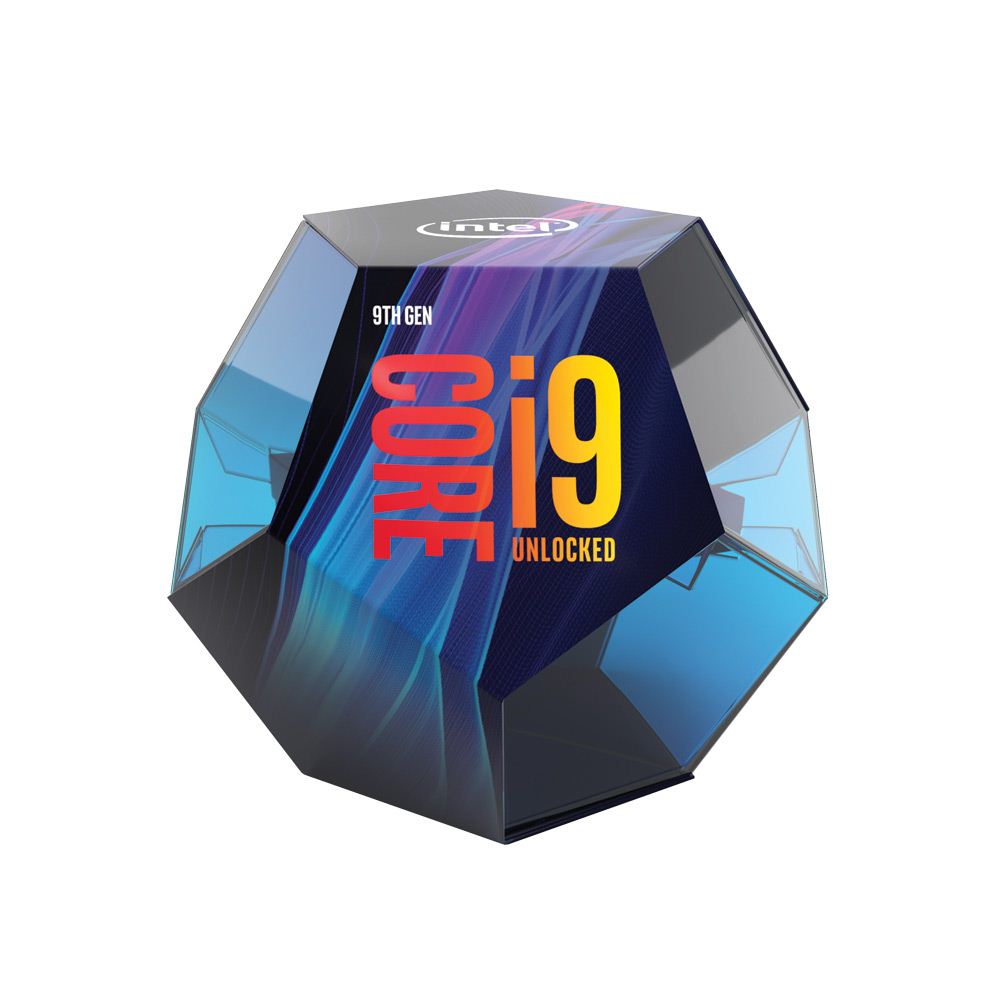 In 2019, the core i9 9900k was the easiest and probably the only pick for 4K gaming.  there was no alternative that could outperform this top tier Silicon brick from Intel. Eventually, It was easy picking for us. At that time we had to spend around 550 USD to get this in Bangladesh. 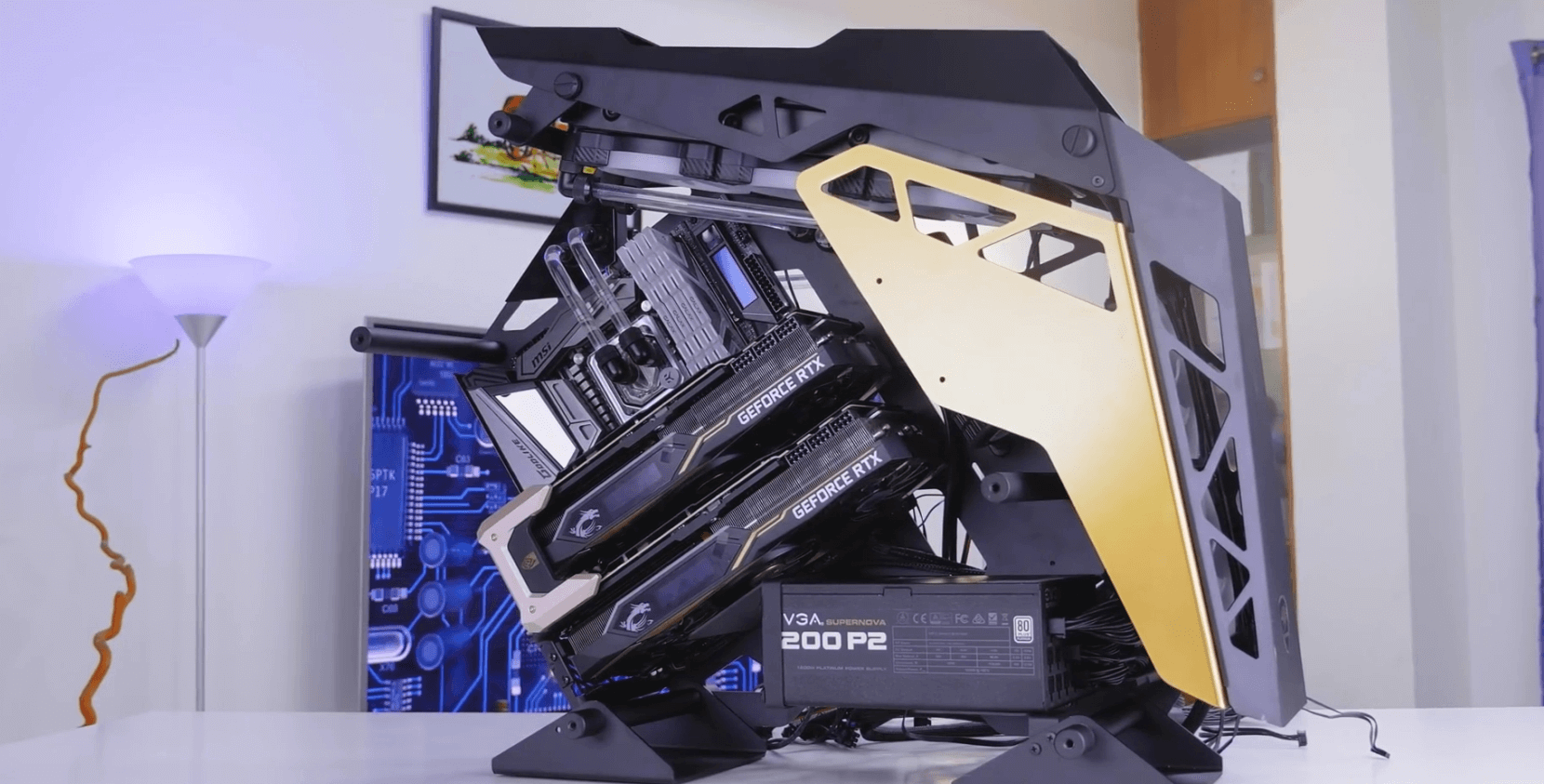 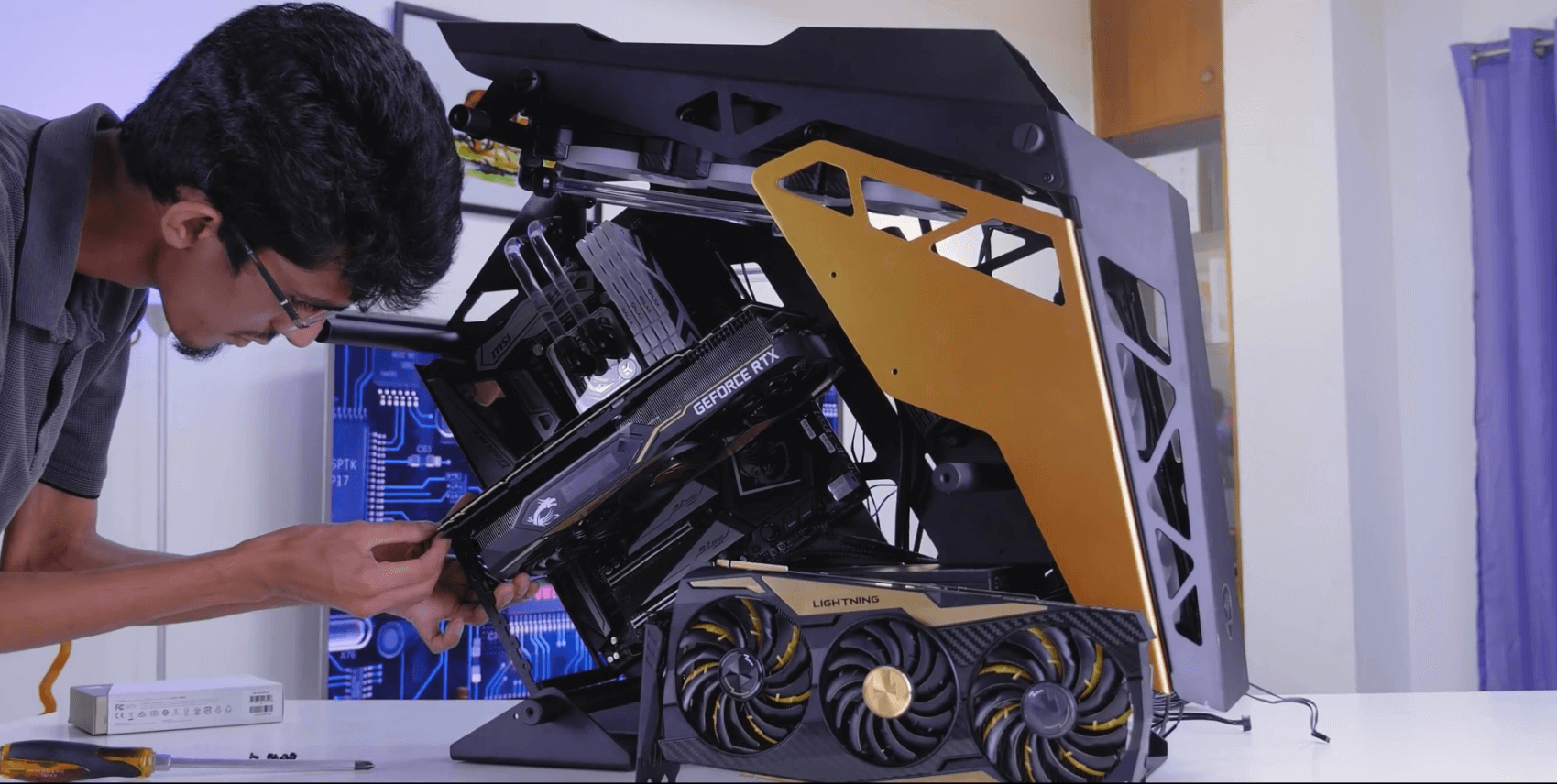 There are some key features that actually did separate the build from the others, which made this build somewhat special. The graphics card is (or I’d rather say ‘are’) one of them. We had used 2 identical units of MSI’s Geforce RTX 2080Ti Lightning Z. Yes, you got it right, this build features the SLI feature of Nvidia. At that time it was the most powerful GPU available from MSI, maybe from Nvidia also.

You can’t afford to keep any room to sacrifice when the case is about the Power supply, most sensitive or one of the most important parts of a pc. For supplying power to this beast, EVGA’s 1200W P2 was our first choice which obviously was not available in Bangladesh (in fact you cant find an EVGA product in Bangladesh even in 2021 laughter emoji) ). We had to bring that from abroad. The PSU comes with synchronizable RGB. 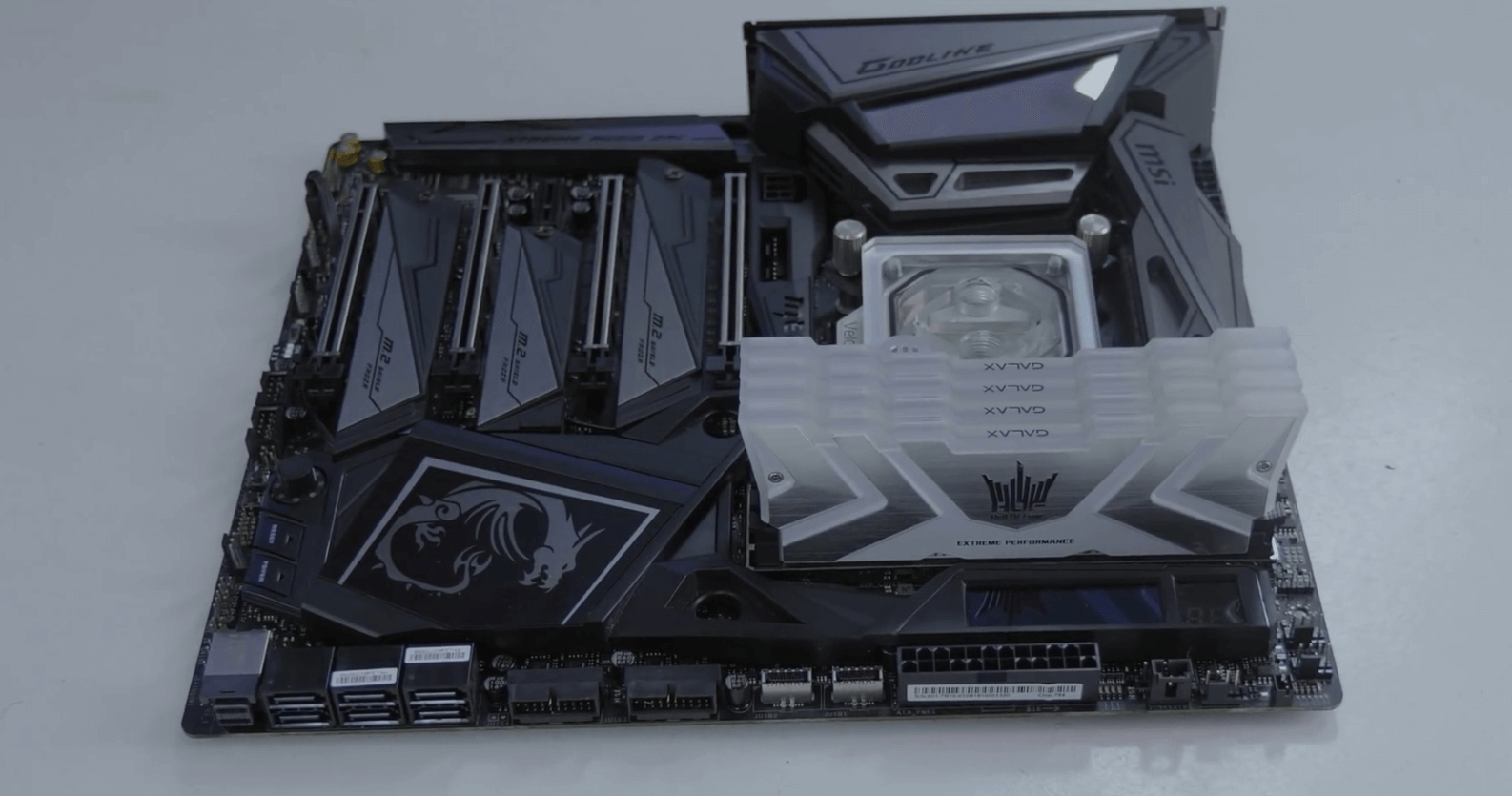 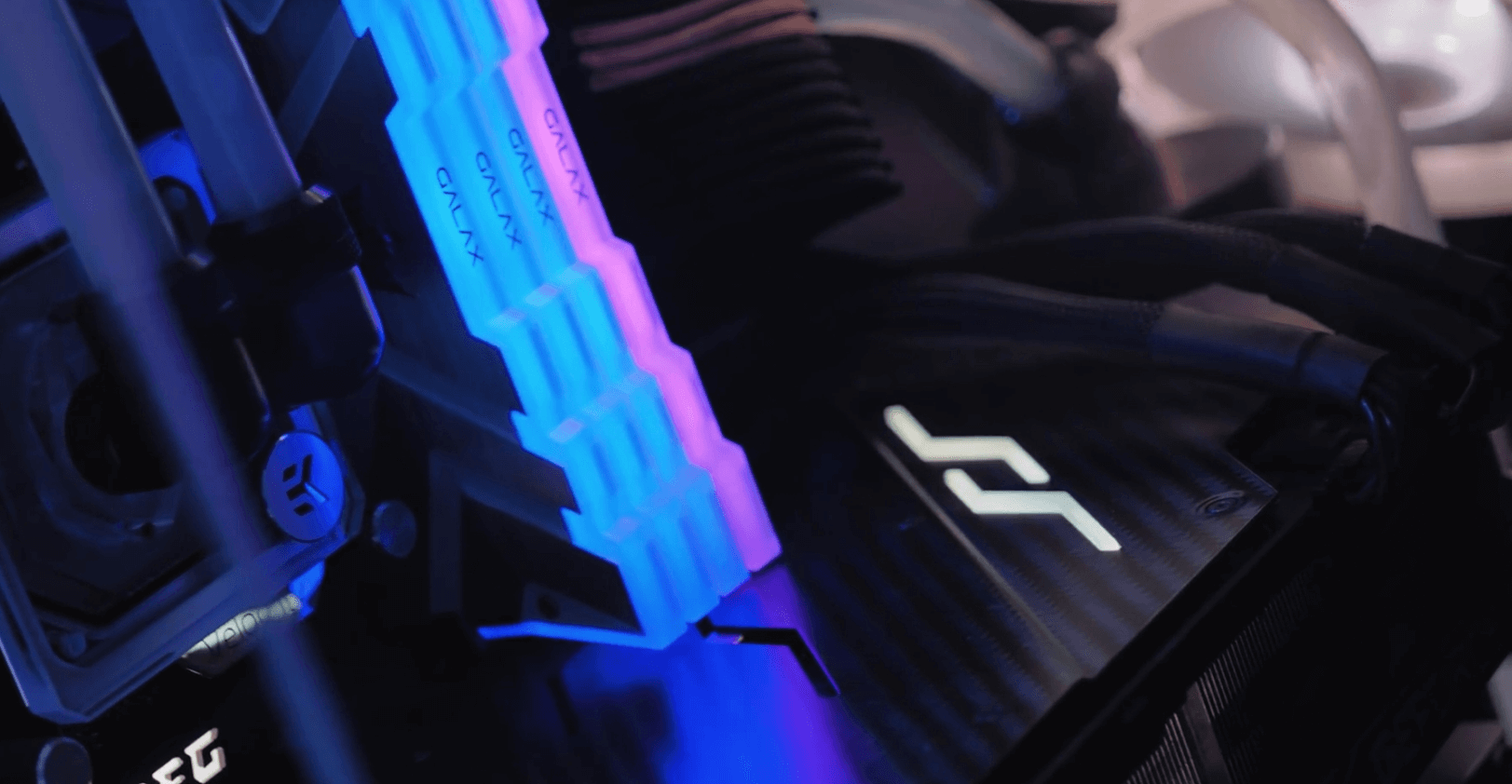 In this build, we have used 4sticks of Galax Hoff Edition Memory modules (4x8GB). The owner had to struggle a lot to get those sticks. 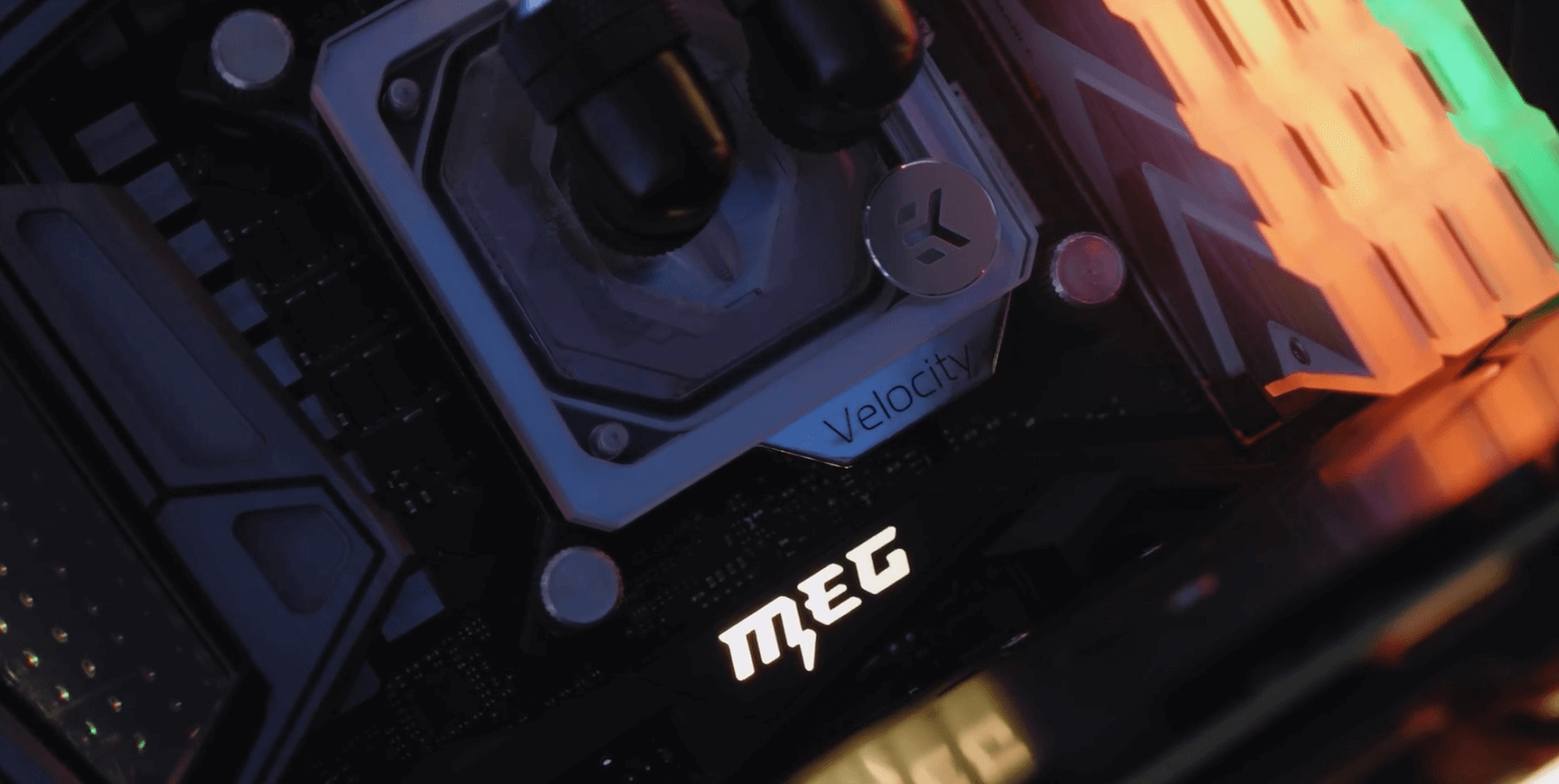 When one is building a monster PC for the best possible performance in which OC,water-cooling, or these sorts of kinds of stuff will take place in regular intervals, a good motherboard is a must. , in fact, to get the best out of all the components, we must fit those into good in fact a top-tier motherboard. Speaking about the motherboard, we had chosen MSI’s  MEG Gaming Z390 Godlike.

All the components were fit into an open-air case from Cougar, Cougar Conquer. Although it’s a very good casing, it did cause some troubles for this custom build, especially it was problematic for the builders to match the color schemes. We modified the side glass with a Gold color with a pearl finish to match up with the Lightning theme. We also made a custom panel for managing cables. We had to make a custom shroud for the PSU. Many of you may know that this case has also been used in Project Steamboy.

Let’s go through some graphs so that you can get a rough idea about the ability of the PC. As this is a gaming build, we won’t be showing any productivity results. Some of these titles do not support SLI properly and in many cases the CPU bottleneck is present. But surely you can notice from the graphs that the machine is delivering very good performance and thus amazing experience in every title regardless of SLI support of the application.

Remove Your Office Key Instantly in 2021

Microsoft Office is one of the most used software in our daily life. We can see its existence from...
Gaming

With the release of the latest generation of consoles by Microsoft and Sony, a huge amount of last generation...
Gaming PC

For all techies and enthusiasts, we are(PC Builder Bangladesh) presenting one of our mega pc build which is about...